Hunger for a huge part of the world means more than skipping a meal. It is estimated that as much as 11% of the world’s entire population suffers from malnutrition, and every hour alone, about 300 children in the world die from starvation. 1 in 9 people do not have enough food to eat at least one meal a day.

What are the symptoms of hunger disease?

Hunger can trap people in poverty in many ways. It often affects entire generations, negatively impacting their ability to get an education, work independently or have a healthy pregnancy, thus increasing the risk of malnutrition in the next generation.

Symptoms of hunger disease are not just reduced body weight. There are sometimes health problems that affect people for the rest of their lives.

Psychological symptoms include fatigue, irritability, problems with concentration, apathy and sluggishness. At a time when better nourished children show inexhaustible amounts of energy, children with hunger disease do not seem to have the strength to interact with their surroundings.

A characteristic symptom that occurs in children with hunger disease is a swollen abdomen. This is edema and is a symptom of kwashiorkor, which is a disease caused by protein deficiency. Muscle atrophy occurs, masked by swelling and weight gain. Unfortunately, kwashiorkor is fatal if diagnosed too late and left untreated.

Why is there so much discussion about child hunger disease? 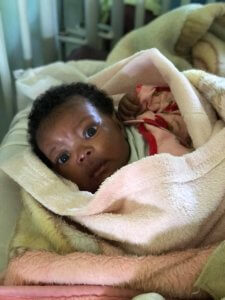 According to WHO estimates, up to 54 percent of deaths among children worldwide are caused by malnutrition. The first thousand days, from the beginning of a woman’s pregnancy until the child’s second birthday, are crucial for its healthful development. The effects of malnutrition in a two-year-old can be permanent: children suffer from stunted growth, learn at a slower pace than their peers who were better-nourished as infants, and struggle with weakened immune systems throughout their lives.

The cause of death from starvation among children is most often simple infections, which an adequately nourished toddler could tackle without medical aid.

Children with starvation disease cannot fight off common bacteria and viruses. Moreover, in the final stages of starvation they are often unable to consume enough food because of their suppressed appetite. This makes the treatment of hunger disease more difficult, even once the child is under specialist care.

Children with hunger disease in Kasisi

Of course, hunger disease can be treated, and we do this regularly at Kasisi. We approach it carefully, trying at all costs to avoid the so-called refeeding syndrome, which can also be life-threatening for the child. Under the supervision of a doctor our carers give the children small portions of special therapeutic milk every three hours, also through the night! Every child who comes to Kasisi, including those who are not given a chance by other centres, can count on our help and on receiving nutritional therapy. 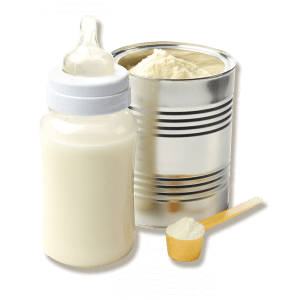 F-100 – this is the name of a special formula that saves the lives of children arriving in Kasisi suffering from hunger disease. The therapeutic milk has been specially formulated to supplement nutrients in young patients affected by severe acute malnutrition while undergoing treatment developed by the World Health Organisation (WHO).

One major challenge is the limited availability of milk. We can’t always rely on regular milk supplies in Zambia, so we routinely look for alternative food sources.

You can help feed a hungry child at any time

Together with us, you can fill the pantry in Kasisi. We are always in need of precious therapeutic milk, which will allow the little ones to grow up healthy and independent in their adult life. With your support we can help children like Christopher and Anastasia, now teenagers, who came to Kasisi with acute hunger disease. Nutritional therapy has given them the hope that other centres in Zambia would have denied them.

Let us provide Kasisi with a full pantry and help the little ones in greatest need. They only have us to count on! By providing a child with therapeutic milk today, you are also safeguarding their long-term mental and physical development and significantly increasing their chances of becoming an independent adult in the near future.

We hope that Christopher’s death, which was an unexpected tragic event for the whole Kasisi, will kick off a chain reaction of good. Because of this, we started the Christopher Sakala Fund. With this fund, we support children being treated on the oncological ward at the hospital in Lusaka.

read more
we have:
5,233 PLN
we need:
10,000 PLN
donate
This website uses cookies. We use information saved using cookies to ensure maximum convenience in using our website. They may also be used by research and advertising companies that work with us. If you agree to the storage of information contained in cookies, click on the top right corner of this notice. If you do not consent, you can change the cookie settings in your browser.
<-- ActiveCampaign Monitor Code -->